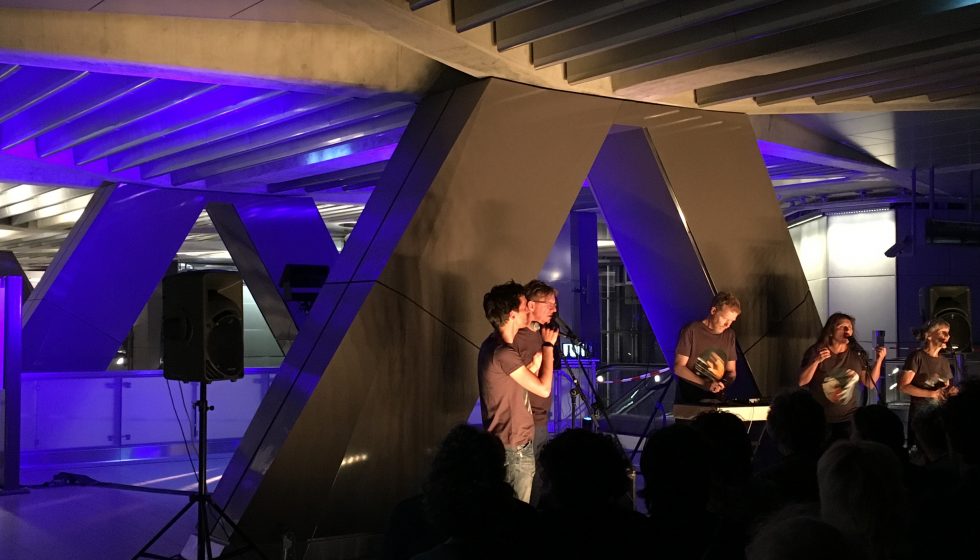 The Genetic Choir is a vocal ensemble based in Amsterdam that sings completely improvised concerts, preferably in unusual locations. The idea behind the choir is to create music as an organism, without a conductor or composer. The premiere of Loop-Copy-Mutate took place on 2 July 2017 in the new metro station of the Noord Zuidlijn below the Central Station of Amsterdam. The 5 performances on that day were all different, due to the chosen and manipulated sound fragments that were made by the audience prior to the concert.

With minimal means, the Theatermachine provided the lighting design for  the location project Loop-Copy-Mutate of the Genetic Choir. The light had to be simple, since everything had to be carried down by hand and the build-up time was only 3 hours. The entire lighting plan is equipped with 62 pinspots, 8 caterpillars, 4 footlights and 3 SGM p5 spots, thanks to Aukes Theatertechniek.

In the weeks leading up to the concert, the Genetic Choir held ‘sound gathering walks’ around Amsterdam CS, in which travelers, passers-by and participants were asked to listen to the sounds of the station. The chosen sounds were collected in a musical database. During the concert on July 2, the audience decided which sounds were used as part of the life concert.